Subscribe to the newsletter Instantly launch the web editor

Graphite is an in-development raster and vector 2D graphics editor that is free and open source. It is powered by a node graph compositing engine that supercharges your layer stack, providing a completely non-destructive editing experience. 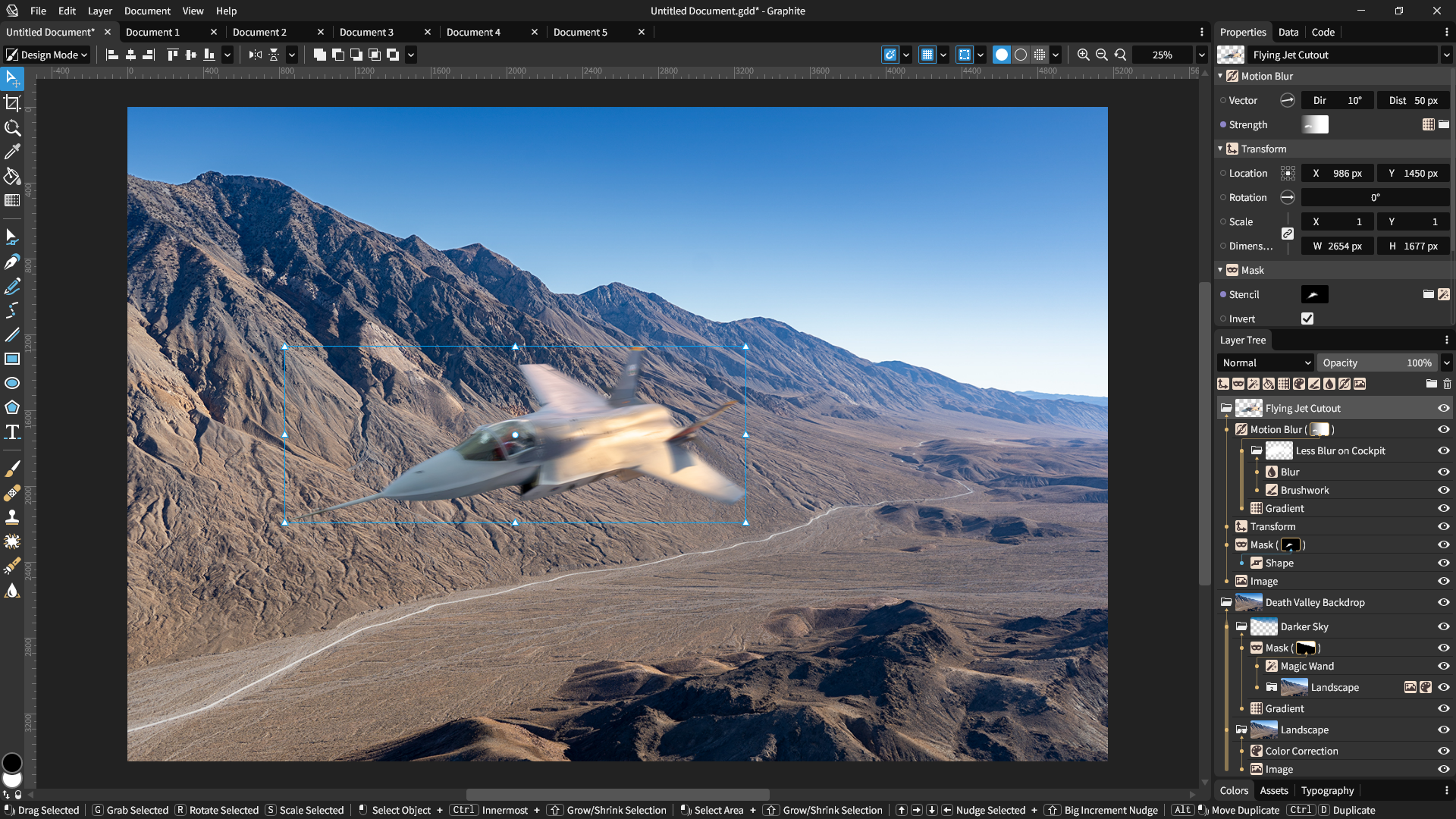 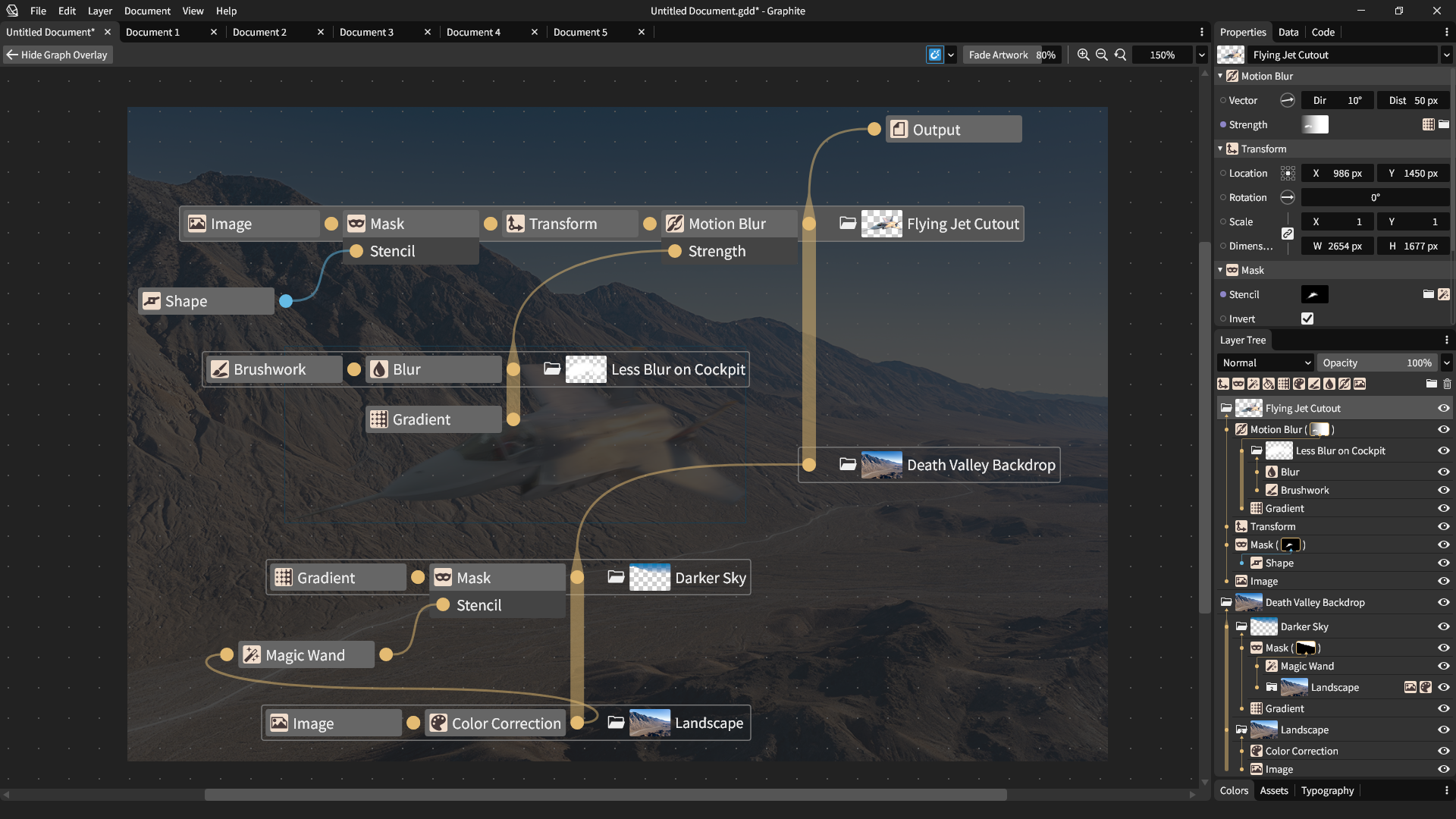 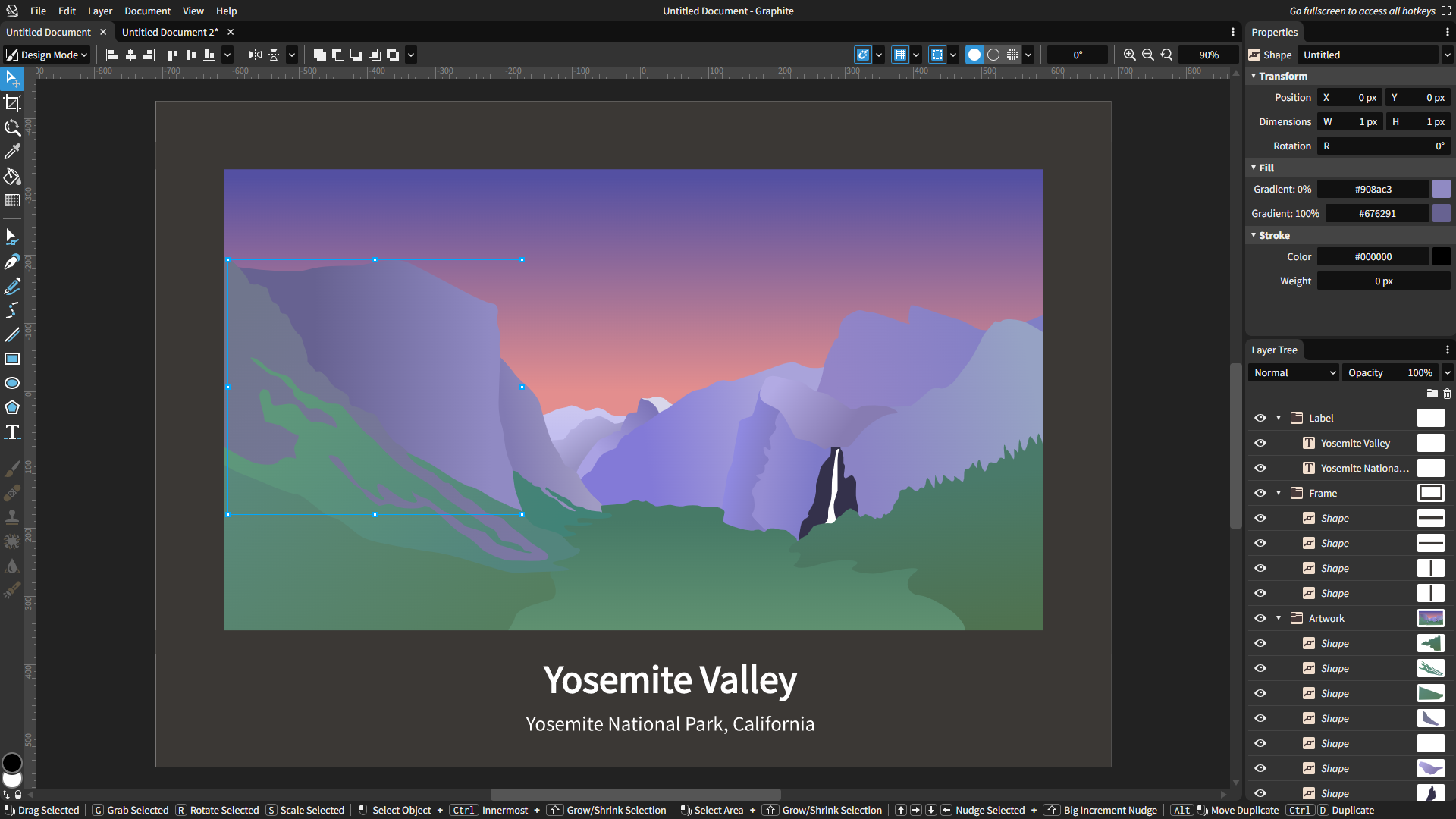 Viewport interface mockup showcasing a photo editing project that utilizes Graphite's raster graphics pipeline, one of the upcoming roadmap milestones. Raster editing is not yet supported.

Vector artwork created in the alpha version of the Graphite editor. Try this out at editor.graphite.rs instantly in your browser.

With great power comes great accessibility. Graphite is built on the belief that the best creative tools can be powerful and within reach of all.

Graphite is designed with a friendly and intuitive interface where a delightful user experience is of first-class importance. It is available for free under an open source license and usable instantly through a web browser or an upcoming native client on Windows, Mac, and Linux.

The accessible design of Graphite does not sacrifice versatility for simplicity. The node-based workflow (coming soon) will open doors to an ecosystem of powerful capabilities catering to the casual and professional user alike, encompassing a wide set of use cases at every skill level.

One year ago, Graphite was merely an idea. Today, the first milestone of the alpha release series is available for testing.

Milestone 1 focused on building an editor interface with basic vector design and illustration tools. Now the alpha release series moves toward Milestone 2: developing a novel node-based vector graphics workflow. After that, raster graphics and more are planned in the roadmap.

Features and fixes will continue rolling out every few days. Please report bugs and vote on issue prioritization through GitHub. While you're there, give the project a star to help grow its momentum.

Try Graphite instantly in your browser:

Upcoming Tech / More in the Roadmap

While working in Graphite, your edits are saved into the Node Graph. Its nodes represent operations and effects like Magic Wand selection and Blur. Node parameters can be altered anytime, helping you iterate faster. The graph is organized into layers and folders, and a layer panel provides a simpler, compact view of the graph.

Raster and vector art, crisp at any resolution.

Just like vector artwork, which is based on curves instead of pixels to preserve quality at any scale, Graphite's raster paintbrushes, generators, and other tools work the same way. A resolution-agnostic render engine lets you zoom infinitely and export at any size.

Graphite aims to be the ultimate 2D tool for every technical artist. From procedural artwork to data viz and automation, it is designed from the ground up to fit into studio content pipelines. You can also integrate Graphite's render engine into your game, app, or server.

Learn more about the planned technology in forthcoming Graphite releases:

Built for the future, powered by Rust.

Always on the bleeding edge and built to last— Graphite is written on a robust foundation with Rust, a modern programming language optimized for creating fast, reliable, future-proof software.

The underlying node graph engine that computes and renders Graphite documents is called Graphene. The Graphene engine is an extension of the Rust language, acting as a system for chaining together modular functions into useful pipelines with GPU and parallel computation. Artists can harness these powerful capabilities directly in the Graphite editor without touching code. Technical artists and programmers can write reusable Rust functions to extend the capabilities of Graphite and create new nodes to share with the community.

The Graphite project could not exist without the community. Building its ambitious and diverse breadth of features will require contributions from developers, designers, technical experts, creative professionals, and eagle-eyed bug hunters. Help build the future of digital art! Join the project Discord server and ask how you can help.

Rust, web, and graphics programmers should check out the contribute page for a quick technical overview and resources for getting started. Or just ask where to begin in the #development channel on Discord and the community will get you set up.

Stay in the loop.

Graphite is early in development and the most ambitious features are still to come. Subscribe for occasional news about big development updates. The first newsletter will be sent for the Alpha Milestone 2 release, featuring node-based editing.

You'll receive your first newsletter email with the next major Graphite news.

High-quality open source software is a community endeavor. Whether you're an artist, a coder, or (like many of us) something in between— you'll be perfect in the Graphite community. Hang out with hundreds of other Graphite users, testers, and developers.

Recent News / More in the Blog

Graphite: a vision for the future of 2D content creation.

The user experience of Graphite is of central importance, offering a meticulously-designed UI catering towards an intuitive and efficient artistic process. Users may draw and edit in the traditional interactive (WYSIWYG) viewport with the Layer Tree panel or jump in or out of the node graph at any time to tweak previous work and construct powerful procedural image generators that seamlessly sync with the interactive viewport. A core principle of the application is its 100% nondestructive workflow that is resolution-agnostic, meaning that raster-style image editing can be infinitely zoomed and scaled to arbitrary resolutions at a later time because editing is done by recording brush strokes, vector shapes, and other manipulations parametrically.